You are about to feel old right now. Why? The first published website is already 20 years old. Web design has come a long way since the first website was published by Tim Berners-Lee in 1991. Unbelievable right?

So, 90s was the time when the masses were being introduced to an amazing place called ‘The Internet’. We had limited number of websites back then and internet was just like any other technical jargon around.

This was the time when you could register to any website with your favourite username without being worried about it being already in use by anybody else. Chances were very high that you could simply have an email address as simple as-

People around required tutorials to understand internet and websites. We know that sounds crazy. Here is one of the old tutorial videos we found on the internet of that time teaching people the basics of internet. Check this out-

In this video, you can see the kids browsing internet websites like NYtimes and CNN which are as basic as it can possibly get. White background, simple text, just different font sizes, colours and some low resolution images.

Due to the limited internet connectivity and slow speed dial-up connections, even these websites took too-long to load and refresh as per today’s standards.

Fast forward this to 2017, We have high speed internet connections and easy internet access to almost 3.7 Billion People worldwide. We have gorgeous looking websites which are not only aesthetically appealing but equally functional and user friendly; thanks to advanced web developing languages like Angular JS, note JS, coffee scripts, etc 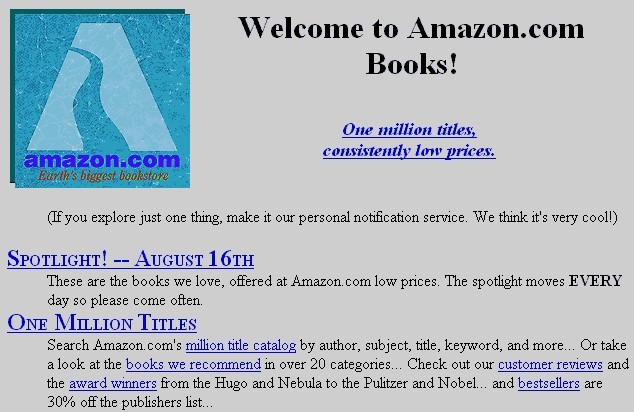 In the early days of the internet, WWW was seen as an alternative to libraries and other physical places to gain knowledge from all around the world, virtually anywhere. By then, websites only portrayed text which could be viewed through the use of a simple line-mode browser.

In 1993, Erick Bina and Marc Andreessen introduced the Mosaic browser. There were numerous browsers at that time with most of them being natural text heavy and Unix-based. No consolidated approach to the graphic design elements including sounds or images existed. The emergence of the Mosaic browser was a great breakthrough.

It was founded and is being currently led by Tim Berners-Lee, the consortium was made for the purpose of developing the standards for the World Wide Web.

The W3C also engages in education and outreach, develops software and serves as an open forum for discussion about the Web.

The organization tries to foster compatibility and agreement among industry members in the adoption of new standards defined by the W3C. Incompatible versions of HTML are offered by different vendors, causing inconsistency in how web pages are displayed. The consortium tries to get all those vendors to implement a set of core principles and components which are chosen by the consortium.

This discouraged the monopoly of a programming language and proprietary browser, which could have changed the effects of the WWW.


In 1994, Netscape Communications was formed by Andreessen. Netscape came up with its own HTML without considering the ancient standards process.

Browser wars became much common all through 1996 to 1999 with Netscape and Microsoft fighting for the perfect browser dominance.

In 1996, Microsoft launched its own browser to complete with Netscape. This was the first web browser to operate the style sheets. In December 1996, the W3C released the CSS to support the layout and presentation. This enabled the HTML code to become semantic which improved web accessibility.

Many new technologies emerged in the field including the JavaScript, the Dynamic HTML, and the Cascading Style Sheets.

Until and unless you have been living under a rock, you know what FLASH is. November 1996 was the time when Flash was developed. At that time, Flash was not as complex and sophisticated as it is today. It used the drawing tools and basic layout, a timeline, and a restricted precursor to ActionScript. However, it gave an access to HTML, JavaScript, and animated GIFs to the web designers.

Flash had a major drawback at the time. It required plug-in to function, which resulted in their limited market share because of its incompatibility.

In 1998, the Netscape released the Netscape Communicator code that enabled lots of developers to take part in upgrading the software. This lead to the formation of the Web Standards Project, which encouraged browser compatibility with CSS and HTML standards by generating the Acid1, Acid2, and Acid3 tests.

In 2000, Microsoft released the Internet Explorer which saw greater success with the CSS 1 and HTML 4.01.

Present: Beauty with the Brains

Enter the 21st century and the we have been interacting with the computers and internet like never before.

Amazing bowsers like Google Chrome with powerful capabilities have been introduced and infact many of them being open source in the sense that they attempt to have a supportive of modern standards and faster development.

Further innovation has led to the release of new standards for CSS3, JavaScript API’s, and HTML5 by the WC3. Designers and developers have access to amazing web development languages and tools to create beautiful websites which are amazingly interactive and user friendly.

With integration of machine learning and artificial intelligence, the website designing and development is further evolving and giving the power of web development to people who have limited knowledge in this field. See how you can be a web designer and create wonderful websites in a matter of 2 minutes

“Human beings have been wired in a way that we tend to listen and interact with things that look beautiful. A smile is a universal gesture for positivity. At the same time we thrive for knowledge and love to learn new things. Now when we combine these two and implement them in website designing and development, we generate traffic and build relevant audience. Information on website is important. Afterall, it is the reason why your audience visits you but at the same time, it has got to be aesthetically appealing and user friendly to keep your audience engaged. From simple text on white background websites to amazingly beautiful and magically interactive websites, we have come a long way in the past 20 years. With AI and machine learning implemented today, imagine what amazing things we will be doing 20 years from now.”

Let's Have A Coffee